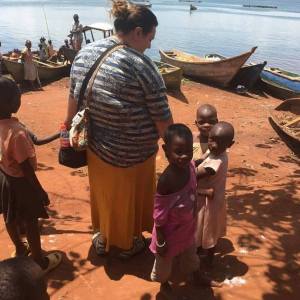 From our Treasurer Krys Brown:

I had waited 23 years for this exact moment. As we started our decent into Entebbe, I looked out the window and became overly excited. I’m here! I’m here! I’m here! It was my first time in Uganda and I was going to soak up every single moment of it. The little 5-year-old girl inside of me that first tried to walk to Africa was jumping with excitement. I was finally here.

My excitement didn’t lessen the rest of the trip. Every time we would do something, no matter how mundane, all I could think was I’m brushing my teeth…in Uganda! I’m drinking a soda…in Uganda! I’m stuck in traffic…in Uganda! We visited schools and got the missionary we were traveling with settled in her new home. We went shopping (my favorite) and got to do fun things as well, like see the exact spot that Lake Victoria feeds the Nile River. I kept saying “I am satisfied” after just about everything we did. I almost started to cry as our plane took off six days later. I didn’t want to leave, I was leaving my heart where I had sent it 23 years previous, in Uganda. 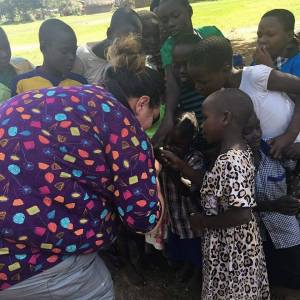 If you’ve never been a missionary, then you won’t understand the next sentence. Reentry is hard. You’ve changed, but your world hasn’t and the people in it haven’t. Now you’re trying to figure out how to fit into a life that you no longer want and no one quite understands what’s going with you. I have had this issue in the past, but not this time. I knew that I wasn’t done with Uganda. I knew that I was going back. This was just the in-between time until I could make it there again.

The Sunday after we got back I started to feel sick. I figured I was exhausted. I was jet lagged and had to immediately jump right back into school and should be better after some sleep. That just wasn’t true and Tuesday afternoon I was sitting in my Hebrew class when our teacher asked us to stand up so he could teach us a song. I stood up and felt the world tilt. I knew that this wasn’t going to be an ordinary sickness and I needed to get to the hospital. That night I was placed in quarantine.

It took three more days until they had a diagnosis. Malaria. The one thing you can’t take a vaccine for. The one disease they load you down with pills for so you don’t contract it and bring it home. Yet here I was, with malaria.

There is no other word for it—malaria sucks. Imagine the worst flu you have ever had, multiply it by 16 and you might come close. I have zero energy, constantly weak and dehydrated, my fever decides to spike at the most inopportune times and my mental clarity is so bad I had an entire conversation with my best friend that actually never happened. This is the worst I have ever felt, and that’s saying something because I’m in and out of the hospital a lot.

The support I have felt from my community is overwhelming. I didn’t realize that I have so many people who love and support me through this. It was a been an eye-opening experience. God is good and faithful in all things, even this. The number one question people ask me (other than if I’m contagious, which I’m not otherwise they wouldn’t let me out of the hospital) is if the trip was worth the illness? My answer is always 100% yes. 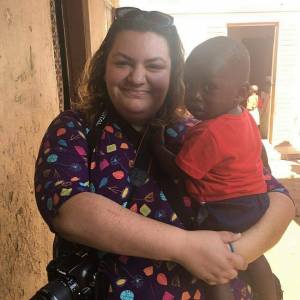 See being a treasure is tedious. I am almost always the bad guy having to say no to purchases and laying down spending freezes. I have to balance budgets and keep track of donors. You get your donation receipts for me and they all need to be signed. I have to make budgets for events and trips, then submit those budgets, and then rework those budgets if they aren’t approved. It can get to be a bit much at times, and well, boring. Please don’t misunderstand, I love my job. I am a paperwork and number crunching fanatic. Hours of paperwork are going to wear on even the most dedicated of people.

When we went to our first school out in the bush, the head teacher told us reports that the students had improved greatly because they were no longer sick. The next school we visited said the same thing. This was the report from all the pastors; the kids were improving because they were no longer sick. Suddenly my job made sense. If I hadn’t made sure the budgets were balanced, if I hadn’t said no to somethings then there wouldn’t be money for medicine. There wouldn’t be smiling and happy kids wanting to play with my hair. I get to do the mundane things back here in the States so that there are children on the other side of the planet that can go to school and do well in life. 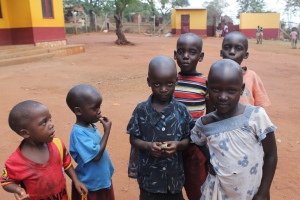 God has given me the opportunity to be a part of this. Almost all these kids have malaria themselves. To them, it uncommon not to have it. They live with this every day. Now, I’m just one of them. I can now empathize with them in a way I couldn’t before. I can now be back home and tell people how awful malaria is, but that there is medication to make it better and here is how it helped me.

I’m doing better now. I get to meet with a doctor,  get on medication and start the whole healing process. I’ve been able to eat which has helped with gaining strength back. A lot of missionaries have contacted me that have lived with malaria for years and have offered some really amazing advice. I am getting better, and I will be better.

There is always a price, a cost of following Jesus. It doesn’t make sense to the rest of the world and for every person its different. Some people sell all their possessions and leave their friends and family to live in a country where they may not feel welcomed for years, if ever. For others its not taking a better job or promotion because it’s not what God wants them to do. For me, it just happens to be malaria. But it is small in comparison to what I get to be a part of, what plans God has in store for me.  The price to be paid, whatever it happens to be for ourselves, is always worth it. 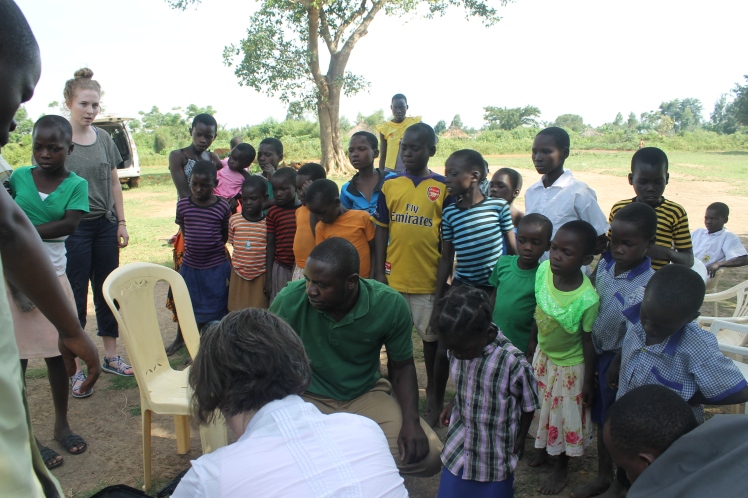 One thought on “Worth the Price”